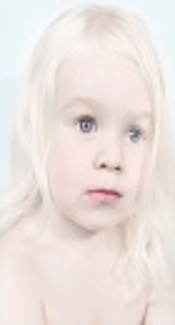 The Aim of this study was to investigate the founder effect of most frequent mutations in OCA patients.

TYR gene was sequenced in 26 unrelated inbred OCA families as well as 56 unrelated healthy individuals. In addition, homozygosity mapping was performed using 13 STR markers for 6 OCA loci (TYR, OCA2, TYRP1, MATP (SLC45A2), SLC24A5 and C10ORF11 genes). Different mutations were found in these genes from which a single base duplication (c.286dupA) and two single base substitutions c.996G > A (p.M332I) and c.230G > A (p.R77Q) had the most frequencies among the OCA families. In order to investigate the founder effect of these mutations, the haplotypes of two STR markers (TYR-S1 and TYR-S2) inside the TYR gene were ascertained.

It was revealed that families with similar mutation harbored similar haplotype for the TYR STR markers too.

We conclude that these mutations are possible founder mutations in the Iranian population.

Oculocutaneous albinism (OCA) is a heterogeneous and autosomal recessive disorder accompanied by hypopigmentation of hair, skin and eyes and symptoms such as photophobia, strabismus, poor vision and nystagmus (1, 2). The OCA patients are at risk of developing squamous cell carcinoma, Basal cell carcinoma and Malignant melanoma (3-5).

In order to find the disease causing mutations in OCA patients, TYR gene as the most involved OCA causing gene was sequenced in OCA patients from 26 unrelated inbred Iranian families, from which the sequencing results of 23 families have been reported previously (12). In addition, homozygosity mapping was performed on all these families using two sets of fluorescent labeled primers (Table 1) to amplify 13 STR markers inside the TYR, OCA2, TYRP1, MATP (SLC45A2), SLC24A5 and C10ORF11 genes. The fragments were separated on 3130 Genetic Analyzer using 500 ROX size standard and the data were analyzed by GeneMarker software (Figure 1). Homozygous loci in each family were selected for further studies by cycle sequencing (13). Fifty six unrelated Iranian healthy individuals were also recruited in this study as control samples.

Table 1. Thirteen STR Markers Inside the OCA Genes Were Selected for Homozygosity Mappinga

aThe size of the fragments are presented according to the mentioned accession numbers in the probe database (http://www.ncbi.nlm.nih.gov/probe). Forward primers were labeled with the FAM or HEX fluorophores. Among all mutations found in different OCA genes (Table 2) (13), those which were common in more than one family were chosen to search for the founder effect. These mutations included c.286dupA, p.M332I (c.996G > A) and p.R77Q (c.230G > A) in TYR gene (in 4, 6 and 2 families respectively). Figure 2 shows the distribution of these families in the west of Iran.

Table 2. Mutations Found in Albinism Patients and the Clinical and Molecular Diagnosis of OCA (12, 13)a

aThe most frequent mutations are bolded. Informed written consent was obtained from all individuals and the study was approved by the local ethics committee.

Different mutations were found in TYR, OCA2, SLC45A2 (MATP) and C10ORF11 genes from which c.286dupA, p.M332I (c.996G > A) and p.R77Q (c.230G > A) mutations in TYR gene were the most frequent ones and found in 4, 6 and 2 families respectively (Table 2) (12, 13). So the size of the PCR products of two TYR STR markers (TYR-S1 and TYR-S2) which were separated via capillary electrophoresis was considered to investigate the founder effects of these mutations. It was revealed that the families with the same mutations shared common STR marker haplotypes (Table 3, Figure 3), which indicates the likelihood of the founder effect.

Table 3. Haplotype Analysis of two Short Tandem Repeat Markers, Indicating the Cosegregation of the Mutated Alleles in the OCA1 Families with TYR-S1 and TYR-S2 STR Markers

TYR Mutations and STR Haplotypes Cosegregating with Them

All patients with c.286dupA, p.M332I and p.R77Q mutations in TYR gene except one were homozygous for these mutations. That patient (indicated as index in the pedigree) was compound heterozygous for p.R239W and p.M332I mutations. The STR markers haplotype cosegregation with the p.M332I was inferred by analysis of his parental genotypes (Figure 4). It was revealed that the STR haplotype TYR-S1:266nt and TYR-S2:351nt was linked to p.M332I which was in concordance with the other patients with this mutation. Patient with Compound Heterozygosity for the Paternal p.R239W and Maternal p.M332I Mutations

Knowledge about mutation distribution diversity may be helpful for early and more cost effective mutation screening and genetic counseling (15, 16).

The founder effect is a feature of populations with a high degree of intermarriage or geographic isolation (16). The overall rate of consanguineous marriage in Iran is about 38.6% and this can increase the probability of incidence of genetic disorders due to common ancestors (17, 18).

A large number of mutations are found in the TYR gene in OCA1 patients. The c.286dupA (11, 19, 20), p.M332I (8), p.R77Q (9-11) mutations in TYR gene have been reported in albinism patients and were the most frequent mutations (with the frequency of 17.39, 10.86 and 8.69% respectively) in our previous study performed on 23 consanguineous families (12). Also 3 more families with p.M332I mutation were later included to this study. In this study we investigated the founder effects of these three mutations in unrelated OCA families in Iran. The potential founder effect of p.R77Q which was the most common TYR mutation in the Pakistani population was also reported by Shah et al. (16).

Two STR markers used for haplotype analysis were informative (14), which enabled us to deﬁne the co-segregating haplotype shared by the four, six and two Iranian OCA families with c.286dupA, p.M332I and p.R77Q mutations respectively.

In all OCA patients with the same mutation, common haplotype was identified, indicating ancestral haplotypes and suggesting the founder effect.

Haplotypes cosegregated with p.R77Q and p.M332I were also observed in noncarriers (with the allele frequencies of 13% and 6% respsctively). Although this may be due to the small number of the STR markers used for haplotype analysis and addition of more STR markers to this study may reveal the uniqueness of STR haplotypes linked to these mutations.

The studied families spread over different areas of west of Iran. Our findings may suggest that these families with the same mutation are distantly related and inherited the mutations from the common ancestors.

Introducing the founder effect of the mutations and knowledge about the haplotypes cosegregating with them, may lead to a faster mutation screening. So if homozygosity mapping of different OCA genes is performed for OCA patients in inbred families, not only the disease causing locus may be found, but also in patients inheriting the mutations with known founder effect, the STR marker haplotypes may lead to predict the exact mutations too. However cycle sequencing is necessary for confirming the results.

Copyright © 2017, Journal of Human Genetics and Genomics. This is an open-access article distributed under the terms of the Creative Commons Attribution-NonCommercial 4.0 International License (http://creativecommons.org/licenses/by-nc/4.0/) which permits copy and redistribute the material just in noncommercial usages, provided the original work is properly cited
download pdf 3.03 MB Abstract XML Get Permission (article level) Import into EndNote Import into BibTex
Number of Comments: 0